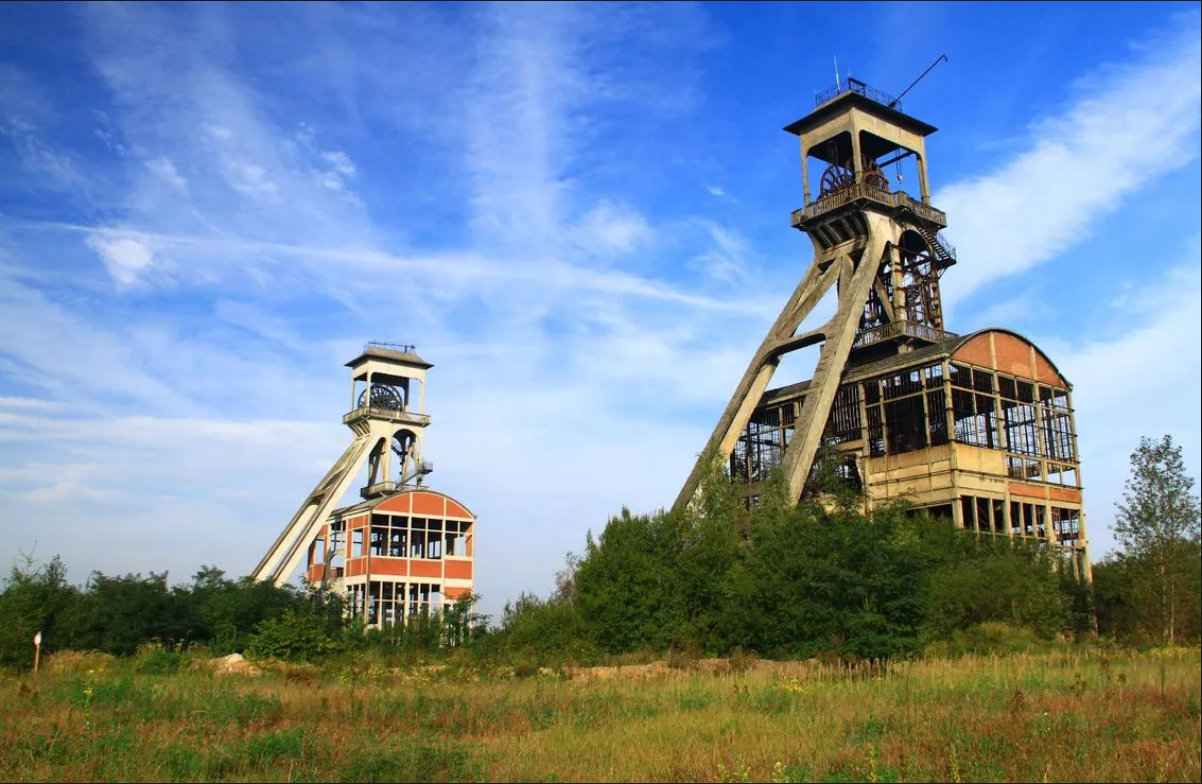 In the 20th century, Limburg coal mines were established, with a series of garden suburbs for workers in their wake. This tour takes you back to the last century. Along the way, you will learn about the origins and architecture of the garden suburbs, as well as the lifestyle and culture of the miners.

Start at the former management and engineering building of the mine, an imposing neoclassical building with a facade full of symmetry. The front garden, a "French garden," follows the style of the structure and consists of rigid geometric paths interspersed with lawns and low shrubs. In the center of the garden is a beautiful fountain.

Next, walk through the garden district of Eisden. The houses are built in a rural style with half-timbering in the facade. Architect Raymond Unwin (1863-1940) used the same elements each time for the garden district, varying them.

There are several housing types, with more or less comfort. The large, detached engineer homes feature a spacious garden. There are also two-, three- and four-bedroom houses, with the houses adjoining each other. Lodging houses housed single men. And the director? He lived in the director's residence, surrounded by a vast director's park. Moreover, Unwin drew up rules about front yard landscaping: it was important to plant flowers, in order to keep the streets bright.

In the 1930s, the neighborhood was expanded to include a boys' and girls' school, a convent and St. Barbara Church. The church was designed by architect Auguste Vanden Nieuwenborg (1890-1979). The typical Gothic style was combined with modern elements. There are pointed arch windows and stained glass windows. The church was inaugurated in the 1950s.

In 2022, one hundred years after the mining of the first coal, a mural was installed on the facade of the school to commemorate the miners of Eisden. Three Spanish artists created this work, a drawing of six miners with the mine buildings in the background. Next to the drawing is a poem by Jan van Amsterdam:

"I don't know, black comrade,
How you win your wagons of coal.
I don't know, underground mate.
How you find your way benejen.
I only know, and that's what matters,
Your coal forms my existence."

There is a second monument in the church square to commemorate the miners who perished between 1921 and 1987 in coal mine Limburg-Maas. It is a kind of portal resembling an "elevator cage," a reference by artist Pollie Gregoor to the underground shafts.

There is no denying that working in the mine was dangerous and hard. Nevertheless, the walk in the garden district also shows the beautiful sides of miners' life, with much attention to nature and leisure. In the early 1950s, for example, a gazebo was built in which several concerts took place. Soccer club Patro Eisden provided unforgettable sports moments. The houses and streets of the garden district were always tidy and the long avenues were finished with rows of trees.

Walking through the district takes you back in time. Meanwhile, the audio guide in the ErfgoedApp tells the whole story, so you can pay attention to the small details as you walk. Definitely worth it!

Tagged? Check out the tour here.
Download the ErfgoedApp in the App Store or via Google Play.

The days are shortening, the end of the year is approaching. That also means extra cosy moments for a heritage visit. The ErfgoedApp enriches your cultural excursions with multimedia information via the latest technology. Thus we launched this [https://faro.be/index.php/blogs/michelle-van-meerhaeghe/nieuw-in-de-erfgoedapp] and these [https://faro.be/blogs/michelle-van-meerhaeghe/nieuw-de-erfgoedapp] tours earlier this year
A winding thread through West Flanders provincial domains ... What do several of our West Flanders provincial domains have in common? Not only the presence of a lavish castle, but also the meandering English landscape style parks that embrace the castles are visible in some domains. The style movement took place during the
Walk through three Leuven neighborhoods and go in search of the roots with the ErfgoedApp of these neighbourhoods. Local residents guide you along a series of striking places and tell you the stories of the past that coloured the neighbourhood. stories about the past that coloured the neighbourhood. Street Stories The three Leuven tours are part of Straathistories [https://www.erfgoedcelleuven.be/nl/straten--buurten-1/